Every experienced businessperson and facial plastic surgeon can tell you:  personal referrals are crucial for growing your business.  Facial plastic surgery practice marketing is certainly easier if you have a good patient referral program.  This is not something that can be left to chance.  It’s too important.  Marketing strategies that include outbound (broadcast or print) and inbound marketing (article writing, SEO, search marketing and social media marketing) are all made better by a steady flow of patient referrals.  Psychology-based marketing strategies can make a real difference here.

In The Psychology of Patient Referrals – Part One, we discussed how social psychology’s Reciprocity Rule can create an atmosphere that will foster patient referrals.  Your office may already be implementing much of what is outlined there.  However, as any good traditional or digital marketing agency can tell you, experience shows that making people want to advance your cause (or, for that matter, engage your services) is not enough.  To get action, you need a trigger that sparks the desired behavior – in this case, generating a referral.  Here’s a trigger that can really work – and the psychology behind it.

Putting psychology-based marketing’s Consistency Principle to work for you

Stanford psychology professor Dr. Leon Festinger was a key figure in turning the study of psychology from a philosophy into an actual science.  Festinger and like-minded colleagues insisted that psychological principles should be based, not on case studies and observations, but on hard science.  Conducting high quality, controlled studies that required substantial replication revolutionized psychology.  That process has revealed principles that can help you grow your practice, in this case by getting more patient referrals.

Some 1,000 controlled scientific studies have confirmed a basic principle of social psychology:  Most people’s feelings will change to be consistent with their actions and public commitments.  It’s based on Dr. Festinger’s groundbreaking Theory of Cognitive Dissonance.  It’s worthwhile to note that Dr. Festinger and his protégé, Dr. Elliot Aronson, were voted by their colleagues to the list of The 100 Most Influential Psychologists of the 20th Century.  Dr. Aronson and coauthor, respected psychologist Dr. Carol Tavris, describe cognitive dissonance this way: 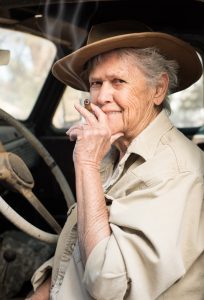 Cognitive dissonance is a state of tension that occurs whenever a person holds two ideas, attitudes, beliefs, opinions that are psychologically inconsistent, such as “Smoking is a dumb thing to do because it could kill me,” and “I smoke two packs a day.”  Dissonance produces mental discomfort, ranging from minor pangs to deep anguish; people don’t rest easy until they find a way to reduce it.

In this example, the most direct way for a smoker to reduce dissonance is by quitting.  But if she has tried to quit and failed, now she must reduce dissonance by convincing herself that smoking isn’t really so harmful, or that smoking is worth the risk because it helps her relax or prevents her from gaining weight (after all, obesity is a health risk, too).

In the case of smoking, changing their thoughts and feelings to justify continuing to smoke clearly harms the smoker.  However, the Consistency Principle also helps people build relationships.  Benjamin Franklin discovered this when America was still a British colony.  Drs. Aronson and Tavris wrote: 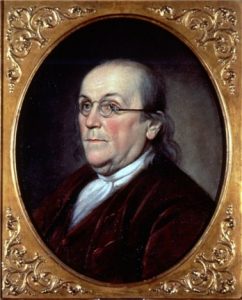 While serving in the Pennsylvania legislature, Franklin was disturbed by the opposition and animosity of a fellow legislator.  So he set out to win him over.  He didn’t do it, he wrote, “by paying any servile respect to him” – that is, by doing the other man a favor – but by inducing his target to do a favor for him – loaning him a rare book from his library” In Franklin’s own words:

“He sent it immediately and I returned it in about a week with another note, expressing strongly my sense of the favor.  When we next met in the House, he spoke to me (which he had never done before), and with great civility; and he ever after manifested a readiness to serve me on all occasions, so that we became great friends, and our friendship continued to his death.  This is another instance of the truth of an old maxim I had learned, which says, “He that has once done you a kindness will be more ready to do you another than he whom you yourself have obliged.”

As Franklin’s experience illustrates, if a patient does you a favor, they are more likely to do you another.  Like Franklin’s fellow legislator, they are also apt to like you more and be more satisfied with your practice.  That could easily lead to giving patient referrals.

Using the Consistency Principle to get patient referrals

Since getting a patient to do you a small favor could lead directly to a bigger one, how can you start the process?  Well, if you’ve already treated the patient well and communicated with them to show your genuine concern during their recovery, you’ve laid the groundwork.  Drs. Aronson and Tavris put it this way:

Dissonance theory also shows us how a person’s generous actions can create a spiral of benevolence and compassion, a “virtuous circle.”  When people do a good deed, particularly when they do it on a whim or by chance, they will come to see the beneficiary of their generosity in a warmer light. 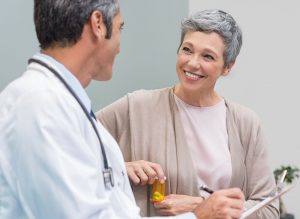 The favor you might well ask of them in return is giving you a positive review.  Wise facial plastic surgeons will make this as easy as possible.  When a patient comes in after recovering from their procedure, the surgeon or someone whom the patient already knows and likes could ask them how they feel about their results.  If they respond positively, ask if they would be willing to write you a positive review.

Influence expert Dr. Robert Cialdini states that after someone says you did a good job, you have a “moment of influence” when they’re predisposed to do you a favor.  Make it easy for them to leave a positive review on your website, on your Facebook page, or perhaps on RealSelf right there in the office.

Don’t type up the review for them. Google may penalize you if many of your positive reviews originate on your office computer.   For that as well as legal and strong psychological reasons, patients should enter the review themselves.  Perhaps they could do it on their smartphone, with your assistant’s help if necessary. As highly respected social psychologists Drs. Aronson and Tavris point out, if they do, you’ll often receive another immediate benefit:

In this situation, if your patient liked you and their results prior to writing a positive review, they will appreciate you and their outcome even more afterwards.  Now, as Ben Franklin stated, ‘He [or she] that has once done you a kindness will be more ready to do you another.’  They will be much more likely to refer patients to you, their benefactor and friend.

As we’ve seen in “The Psychology of Patient Referrals – Parts One and Two,” good patient treatment, care, communication and outcomes are the basis for getting patient referrals.  That shouldn’t surprise any facial plastic surgery practice.  These set up a “virtuous circle” that leaves patients actively wanting to help their doctor and his friendly, attentive staff.  Then, while patients are in the giving mood, ask them to write a positive review where it will be seen by other, preferably many others. 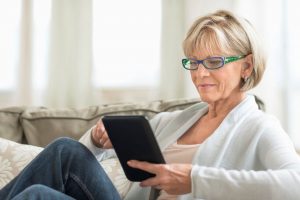 Make it easy for patients to leave positive reviews while they’re in a giving mood.  Once they leave your office, odds are their busy lives will distract them from ever doing it.  If all you get from this is a positive review on your website, Facebook page or RealSelf, that in itself can be quite valuable.

According to the Pew Research Center, more than 70% of prospective patients search for health information online.  A 2015 survey of 1,438 active patients revealed that 77% use online reviews as the first step to finding a new physician.

After they’ve personally typed in their review, someone they like (preferably their surgeon) should ask them to refer a patient.  If you follow the entire string of events, step by step, your patients will be much more ready and willing to refer their friends, relatives and workmates.

A good patient referral program can be a vital part of your overall practice marketing strategy.  For more information on how to use psychology-based marketing to grow your practice or increase your web presence through high quality article writing, please feel free to contact me.